A Few Examples Of My Work:

The drilled lugs of this Roamer wrist watch had worn almost completely through the case. Fortunately the owner was keen to refresh the watch by having it re-plated in gold, making it was the perfect time to plug the wear prior to the electroplating. With a full service of the movement, new crystal, new spring bars, new strap and fresh white luminescence on the hands the watch looked great.

The restoration of this clock from a tired looking case with mechanism in desperate need of an overhaul, back to a piece worthy of any chateau provided a very pleasing "before and after".

All of the brass needed cleaning after removing the old tarnished lacquer, polishing back to its original shine and given a fresh coat of cold lacquer. Where possible I removed all of the panelling, cloth, pins and ornamentation. Only the brass marquetry inlay remained in place to be cleaning up in situ with the tortoiseshell.

The numeral cartouches on the dial were tarnished and wobbly so they were secured up and cleaned along with the dial and hands. With some new burgundy cloth to bring back the richness of the side panels it really was back to its former glory. Following a full movement overhaul everything was reassembled and looked fabulous. Quite the transformation.

For a very very long time I have longed to see inside a singing bird box and get to grips with the mechanism. I recently finally had the opportunity to do this for the first time for a repair and restoration project. It was just fantastic to see such a lovely little mechanism perfectly arranged to fit inside such a compact unit. I call it a Griesbaum style singing bird as there was no K.G marking present for Karl Griesbaum but overall it looked very much in keeping with those mechanisms.

The main cliff notes of the overhaul are as follows:

On disassembly, the lifting mechanism for the lid and the fretwork plate was very bent and clearly in need of some repairs. Once the movement was free the severity of the neglect became obvious. It was very dirty and bent and soldered all over the place. The wings were barely flapping and the bellows created more of a wheeze than a song. The self close at the end of the song led the bird to bash its head in the lid at the wrong angle jamming the mechanism until the spring ran down. A sad state of affairs.

First thing first, the entire mechanism was dismantled, cleaned and overhauled and reassembled to test.

Once the whole mechanism was dismantled and cleaned up there were so many adjustments needed to be made to make sure the bird moved, flapped and chirped smoothly. The bellows and windbox needed to be re-skinned and repaired with new valves.

Getting the lid mechanism to move freely and self close at the end was a particularly fiddly task (as often the final details can be) but the finished article proved to be a success.

The learning curve in this project was utterly immense and became a real challenge to complete with some trial and error of new techniques, processes and materials over several solid weeks of work. There were huge lessons during the process. My access to resources to learn the best way to complete the bellows restoration at the time was very limited, frustratingly following this repair I have found much more information on how one should effectively re-skin a set of bellows which I can improve upon next time to get an even better result. But every clockmaker loves a mechanical puzzle and once finished, this was a particularly satisfying job to resolve.

Damaged pallets on a french clock with visible escapement.

This french clock has suffered a few attempted repairs on examination. Issues with bent teeth, eccentric repivoting and many bent bridges and plates. The main problem, however comes from the pallets. You can see from the picture below just how uneven and bent they are. The steel entrance pallet was glued in at a steep angle ,seemingly in an attempt to improve the action of the escapement. The jewel pallet (low grade garnet or corundum) has a chip on the outside edge of the stone, but not on any of the acting surfaces so can be cleaned of all the original shellac and reused. First all of the original adhesives being used were cleaned off by dissolving in methylated spirits. The problem for the previous repairer then became obvious as at some point the holes for the pallets to be set in had been opened out unevenly. As the holes were uneven it cannot have been the case that replacement pallets had been selected which were smaller than the originals. I felt the best option was to bush these holes with an appropriate internal diameter to fit the existing jewel pallet stone and replace the steel with a corundum one. Whilst there is nothing particularly wrong with a well finished set of steel pallets, its best to have matching materials for the sake of even wear and tear on the pallets and, if nothing else, for the sake of aesthetics.

Once the bushing was finished the pallets could be plated appropriately making sure that the teeth of the escape wheel interact with the locking face above the line of centre of the pallet, which is most important for the action of the pendulum. A small amount of fresh shellec was then applied to the back of each of the pallets.

Once the rest of the overhaul had been completed, case clean and refreshed. Mild dial repairs and hand straightening the clock ticked merrily away with a good action.

This lovely ships clock with english lever escapement and fusee needed a complete strip down and overhaul. The quality of the mechanism and attention to manufacturing detail really set this clock apart from other timepiece ships clock. Little touches like the attachment of the escape wheel to the arbor with screws (as shown below) show this.

Once overhauled the clock looked much better and ran fantastically. It lovely to work on items of great quality like this with all of the features a clockmaker can recognise as superior design and workmanship. Here are just a couple of pictures of the clock once overhauled.

French clocks, before and after cleaning.

This photo shows two very similar french clocks which started in the same condition, it shows how much cleaner the clock is once overhauled. Removing all of the old grease, dirt and swarf is vital for both the smooth running of the clock and longevity of the parts. Without regular overhauls the acting surfaces will wear from the grinding paste made from dirt and debris and without fresh lubrication the oil will lose its appropriate viscosity and cleanliness.

A short video of making a new balance staff for a carriage clock.

The video shows an image and clip gallery of some of the stages involved in replacing a damaged balance staff. It also shows some of the checks that need to be made during the process to ensure that the replacement will function properly when finished.

Such a delicate part of the clocks escapement assembly can take a real beating, here the effects of a huge shock of power from a drop or mainspring breaking can be seen on this 4mm long pallet frame. Fortunately I managed to straighten out the bend and the stress did not leave the material too weak as a consequence so the original part can live on in the platform.

This lovely 400 day clock is a beautiful example of the machining finish called guilloche. The process uses a tool called a rose engine which is a lathe whose headstock rocks back and forth against a series of cams to produce an assortment of geometic patterns, often in floral patterns, hence the name. The term guilloche does mean exactly the same as "engine turning" however guilloche is normally recognised with a layer of enamel on top of the engraved marks in the metal although it is not an identifying feature of the term. There is a very good video of the use of a rose engine through this link: 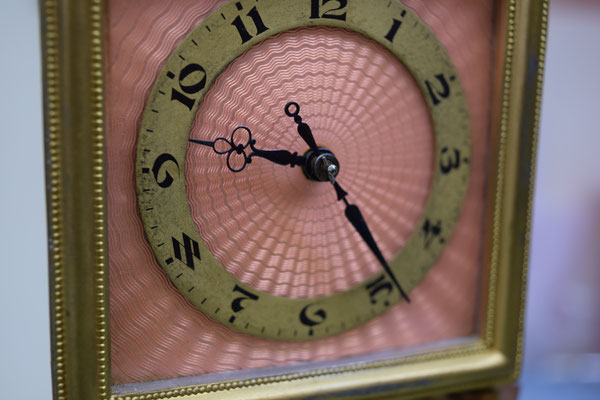 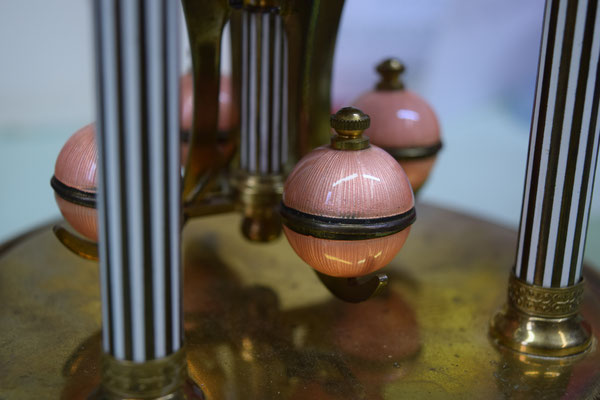 A recently overhauled music box which can either repeat the same tune or shuffle through the eight options it can play. In this case the mechanism and box was completely dismantled and cleaned up. Some of the mechanism was badly worn, with poor depthing and endshake. Once the overhaul was complete I made a quick video of the music box in full swing.

During an overhaul, all of the pivots will be examined and polished up accordingly. A pivot should be polished into a smooth, perfectly parallel pivot of a length just fractionally longer than the thickness of the plate material. Getting the pivot into this state keeps the frictional wear of the clock to a minimum when working in tandem with the correct lubrication, without this care and attention the resulting wear can damage the pivot as badly as is seen in the picture above. In this case, the only option was to re-pivot the wheel. Fortunately, the pivot hadn't worn to the point it snapped which would have done much, much more damage to the clock as a whole

Hallmarked in Birmingham 1911, this silver and wood mantle clock with cylinder escapement with a cracked jewel in the balance clock. Whilst its hard to see the hairline fracture to one side of the pivot hole the effects of this damage would gradually wear away the pivot of the cylinder escapement plug. The fact that it splits in two upon removal also shows its vulnerability. To preserve the original platform as long as possible, identifying and rectifying issues like this are vital. 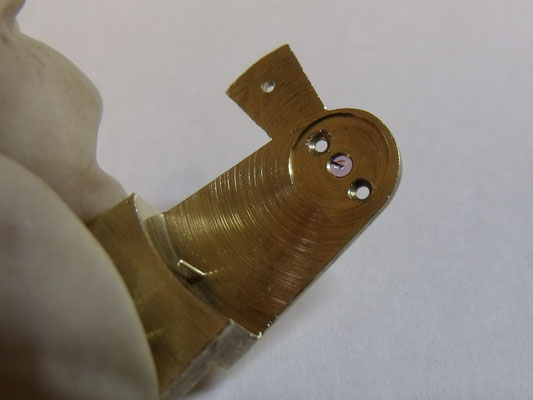 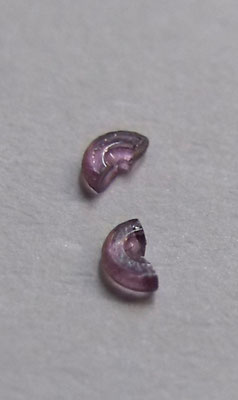 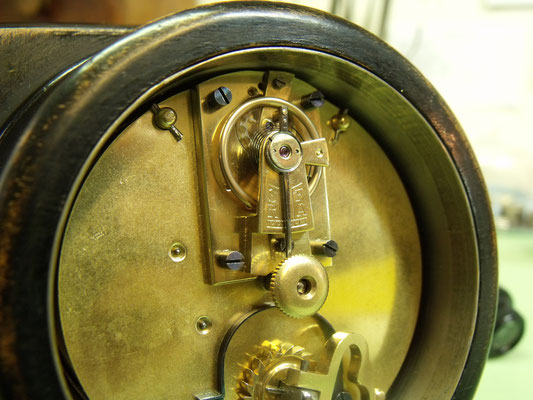 This minute hand which the carriage clock arrived with was really letting down its companion spade hour hand. Matching a similar style one makes the overall appearance more unified.

This gorgeous little mantle clock is in one of my favourite pairings of silver and tortoiseshell. Using the hallmarks from the case it was made by William Comyns and son in London around 1910. Once the shell had been fed with oil to bring it back to its original luster, the colour really shone through, complimenting the marquetry silver fantastically.

Member of the British Horological Institute